Adam Alter is an Associate Professor of Marketing at New York University’s Stern School of Business. His latest book, ‘Irresistible‘, hits you between the eyes with a provocative discussion on the obsession society has with technology and how we, as individuals, have become highly addicted to our smart devices.

Ever since childhood, Alter has had an obsession and interest in addiction. In his book he describes how, as a child, he was terrified of drugs and would have a recurring nightmare that someone would force him to take heroin and that he’d become addicted.

This interest continued into his adult life, where Alter pursued a career as a psychologist of addiction. Rather than focussing on chemical related addiction in the form of drugs, smoking, and alcohol, Alter opted to focus on behavioural addiction, specifically related to technology and everything associated with it; apps, gaming, online gambling, pornography, TV streaming, and social media sites. As such, he identified that addiction is produced largely by environment and circumstance rather than being weak-willed or inherently born into the wrong family with the wrong genes.

Alter argues that 40% of the developed world has an internet-based addiction. He describes behavioural addiction as having “a deep attachment to an experience that is harmful and difficult to do without”. Alter goes on to explain that addiction or compulsion “merely brings relief from restless anxiety.” For many of us, checking our smart devices has become a compulsive addiction, one that we find difficult to control. Consequently, this addiction provides us with a form of relief.

If you think you are not hooked, take a minute to think about what your approach is to managing your emails. Most of us “pursue the unforgiving goal of Inbox Zero, which requires you to process and file away every single unread email as soon as it arrives.”  Alter describes emails as being, “like zombies: you keep killing them and they keep coming.” This analogy could be used to describe many of the technology platforms out there, with more apps being developed and introduced to the market every day.

One of the most fascinating things Alter discusses throughout the book is how some of the most innovative and famous people within the technology industry, like Steve Jobs of Apple and Evan Williams of Twitter, are known to have not allowed their children to play with touch screens. Instead, they enforced strict time limits on home devices. Chris Anderson, head of TED and the former editor of WIRED, did the same for the simple reason, “we have seen the dangers of technology firsthand.”

“It seemed as if the people producing tech products were following the cardinal rule of drug dealing: never get high on your own supply.” It makes you do a double take when you realise that only drug dealers and technology companies refer to their clients as ‘users’.

It hasn’t always been this way and our ‘addiction’ has progressed over time. In 2008, before smartphones became widespread, adults spent just 18 minutes a day on their phones. This is vastly different to the results reported in 2014 after Kevin Holesh, a programmer, created an app called Moment which tracks user’s smart phone interaction. Holesh was afraid screen time was getting out of control and the results revealed the typical adult user in the USA checked their phone 39 times a day and were on their devices an average of three hours – and that didn’t include actual phone calls!

The difference in how much time we are spending on our screens has increased dramatically over the last five to ten years but the question is, are we the ones to blame? In his book, Alter refers to Tristan Harris, a ‘design ethicist’ who states that the problem isn’t us lacking willpower; it’s that “there are a thousand people on the other side of the screen whose job it is to break down the self regulation you have.”

These clever designers engineer addictive behaviours by creating goal setting and gamification techniques such as a sense of progress, positive feedback loops, game progression, escalating difficulty, and simulation. As a result, we get hooked.  Whether it is tracking your fitness, getting enough ‘likes’, or being part of an online community through gaming sites like ‘World of Warcraft,’ they have all been designed to be ‘irresistible’ and keep us constantly and compulsively using them. Alter even describes the power and sophistication of streaming TV shows by using ‘cliff-hangers’ so that people will binge their weekends away addicted to watching the whole series in one sitting.

Our attitude towards technology has changed as a direct result of these addictive behaviours.

People have described that they would ‘rather have a broken bone than a broken phone’. We now live in a world where we would rather injure ourselves than become disconnected!

So what can we do from here?

While it is easy to identify that we have addictive tendencies and behaviours, it becomes challenging when we endeavour to change our behaviour. This is simply because avoiding technology in the modern day world is near impossible. Technology is present in every aspect of our lives. From the way we communicate to the way we entertain ourselves and even in the way we work. If you are an alcoholic you can avoid bars, if you are addicted to illicit drugs you can avoid certain social groups, but if you are addicted to various technology platforms, you cannot function in a job without being on-line. Abstinence isn’t really a practical option!

Some may read Alter’s book and conclude that he is simply being an alarmist and over dramatising this new wave of sophisticated technology. However, considering the enormous impact technology is having on us as individuals, professionally, socially and globally, I see Alter’s research and findings as a defining moment in our technology history. He highlights that it really has only been about a decade since most major IT companies, apps and social media platforms have been around and from this, he has decoded what is really happening with technology and how this revolution has been designed to be irresistible to us and therefore, addictive.

Alter acknowledges that technology is neutral – neither good nor evil; however, it is what we do with this technology that can make it a force for good or evil. We can’t deny that technology is a beautiful thing and has given us a wealth of benefits that were unimaginable just a decade or two ago although, there is a fine line between using it in a productive and beneficial way as opposed to a destructive and all consuming way.

For me, the moral of Alter’s book, ‘Irresistible‘, is to be very aware that technology companies are now in the game of keeping us hooked. The saying ‘Buyer Beware’ should be at the forefront of our minds at all times when engaging with technology. Alter’s book highlights to the reader that you no longer need to be a passive passenger but instead, you can be conscious of your addiction and take back the controls.

• Don’t wait until you are truly addicted
• Design your life with technology adding value and don’t allow it to take away from the richness of experiencing things, not just through a screen
• Take digital detoxes every now and then
• Be inspired by people and companies that are taking back the control over technology to ensure they are living their lives 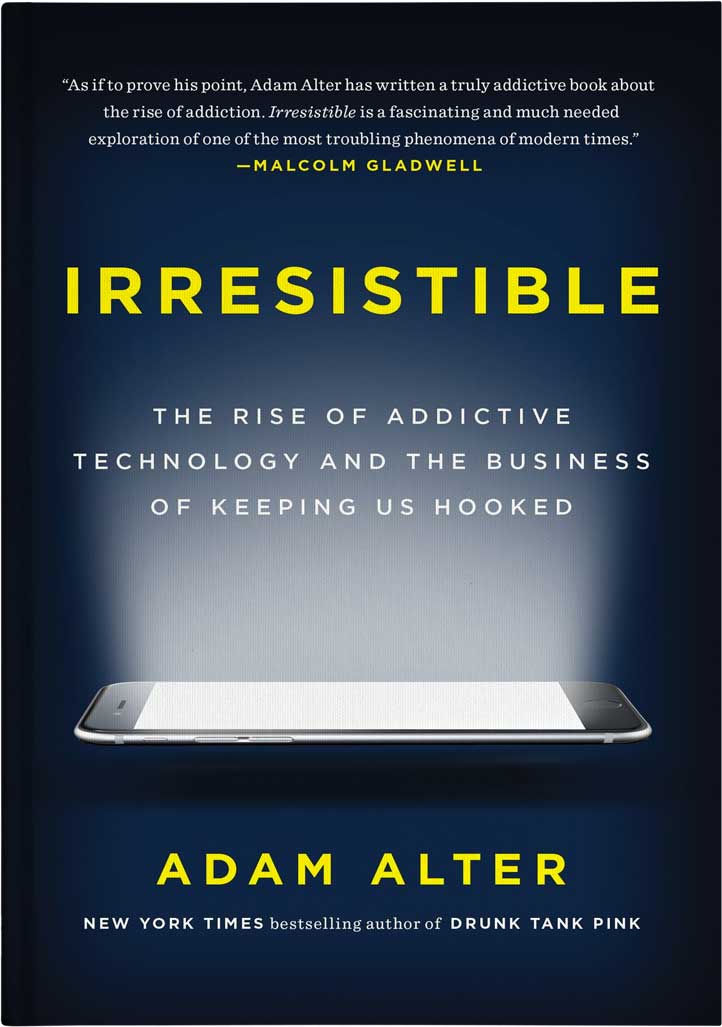