How power works in our hyperconnected world and how to make it work for you.

“Habits are a double-edged sword. They can work for you or against you, which is why understanding the details is essential.”

Henry Timms and Jeremy Heimans have co-authored this amazing book that decodes how the global power base has been completely transformed in our digital age. This book also looks at how individuals, customers and activists now have the power to either help or harm you, your organisation or your business platforms.  In fact, with new power, entire social movements can be orchestrated by anyone, anywhere and at any time.

Henry Timms is the US executive director of 92nd Street Y and created #GivingTuesday to encourage philanthropic acts – inspired by the capitalistic Black Friday. Jeremy Heimans is the CEO of Purpose and the Australian co-founder of GetUp! and Avaaz.

The essence of Timms and Heimans book is their description of the global transformation and the growing tension between two distinct forces – old power and new power.  Here is how they define these two power sources.

It is held by few. Once gained, it is jealously guarded, and the powerful have a substantial store of it to spend. It is closed, inaccessible, and leader-driven. It downloads, and it captures.

It is made by many. It is open, participatory, and peer-driven. It uploads, and it distributes. Like water or electricity, it’s most forceful when it surges. The goal with new power is not to hoard it but to channel it.

With the Old Power model, they argue that this requires little more than passive consumption. Whereas New Power taps into the desire and the easily accessible capacity for people to participate way beyond consumption.  With New Power, the power dynamic has shifted dramatically, but as Timms and Heimans state, ‘a movement is successful when it moves on its own’.

I think we all get that we are now living in a ‘New Power’ world however, when you read their book, you discover the depth and breadth of this new power model. From the business world, digital platforms like Facebook and sharing-economy start-ups like Uber have upended traditional companies. New peer-to-peer giving, lending, and investing models are making bureaucratic giants redundant or at least our dependence on them. In politics, Twitter has ‘toppled a dictator in Egypt’ and the likes of Obama and Trump have used New Power for their political campaign strategy to become the President of the United States. Similarly, the phenomenal global social movements like #MeToo have flipped the traditional gender power balance on its head.

However, this is a cautionary book as New Power is not neutral in its use, because the opportunity to participate and agitate are no longer constrained. In fact, there are examples of where it has been unleashed for both good and bad.

One of the most disturbing but compelling stories on the use of New Power was how a Scottish teenager schoolgirl from a moderate Muslim family was recruited into ISIS using new power tactics. She then followed suit and turned recruiter ‘mastering the tools of online engagement and enticing others to follow’ her to Syria. Ironically, when the might of the US government tried to intervene with Old Power methods to counter her approach – like showering State Department endorsed pamphlets from F-16 fighter jets to ‘think again and turn away’ from being a Jihadi woman, they failed dramatically and were powerless with this old style top-down approach. This one schoolgirl trumped the US armed forces because her approach was about being participatory, peer driven and being comfortable with moving her power sideways from girl to girl! This is ‘new power at its most effective, and most terrifying’.

Timms and Heimans book is not just about dramatic political movements and the obvious digital companies and entrepreneurs that are reshaping the business world and the workplaces that we now find ourselves working in. They also share some great lesser known stories where a car company ‘turns to its customers to design their vehicles’, a media company that is built by the readers and where Dutch nurses have dramatically improved patients’ lives and their own job satisfaction by creating a new power business model that also cuts down bureaucracy.  However, leading with new power requires a ‘different approach to the exercise of power’, a different mindset and embracing new power values like ‘radical transparency and constant feedback’.

Timms and Heimans have decoded and described the following values of old power and new power but note that ‘new power players expect to actively shape or create many aspects of their lives’ and this is what shapes their ‘new set of values centered on participation’.

“New power norms place a special emphasis on collaboration, and not just as a way to get things done or as part of a mandated “consultation process.” New power models, at their best, reinforce the human instinct to cooperate (rather than compete) by rewarding those who share their own ideas, spread those of others, or build on existing ideas to make them better.”

What was surprising and intriguing about this book is how they describe not only when old power trumps new power, but how there are times when you should actually pivot on and use old power as a leader. In fact, the cases studies they share, highlights how leaders and organisation are now required to be bi-lingual and toggle between the new power of ‘movement’ and the old power of ‘institution’ as the situation and strategy demands of us. This will not be easy and will be full of challenges, especially navigating both old and new platforms, personalities and powerplays.

I loved reading New Power and I highly recommend it.  I must admit that given the authors backgrounds, I did assume that they would over glorify the rise of New Power and this would be a very politically left leaning take on New Power. I could not have been more wrong. This book reveals how the rise of New Power is simultaneously redemptive and terrifying. You quickly discover that New Power can both liberate humanity for good and be used to corrupt and control people on scales that were unimaginable just a few decades ago.

As they say, ‘New Power’s Messy Masterpiece’ is a tale whereby we now are at a crossroads on whether it has the ability to bring us together and ‘build a more just world than it does to divide us and exacerbate inequalities’.

Now that Timms and Heimans have so successfully shared how New Power operates, you can either ignore this at your peril or use it to create and channel beautifully engaged movements where the participants surge ahead and play to the greater good of humanity.

“Building this kind of world will be messy – and it certainly won’t be without pockets of hate, co-optation, and a whole lot of distraction. But it is a world all of us can create together, and it is the one most worth fighting for.”

Richard Dore is the Co-CEO and Lead Educator at Proteus Leadership. 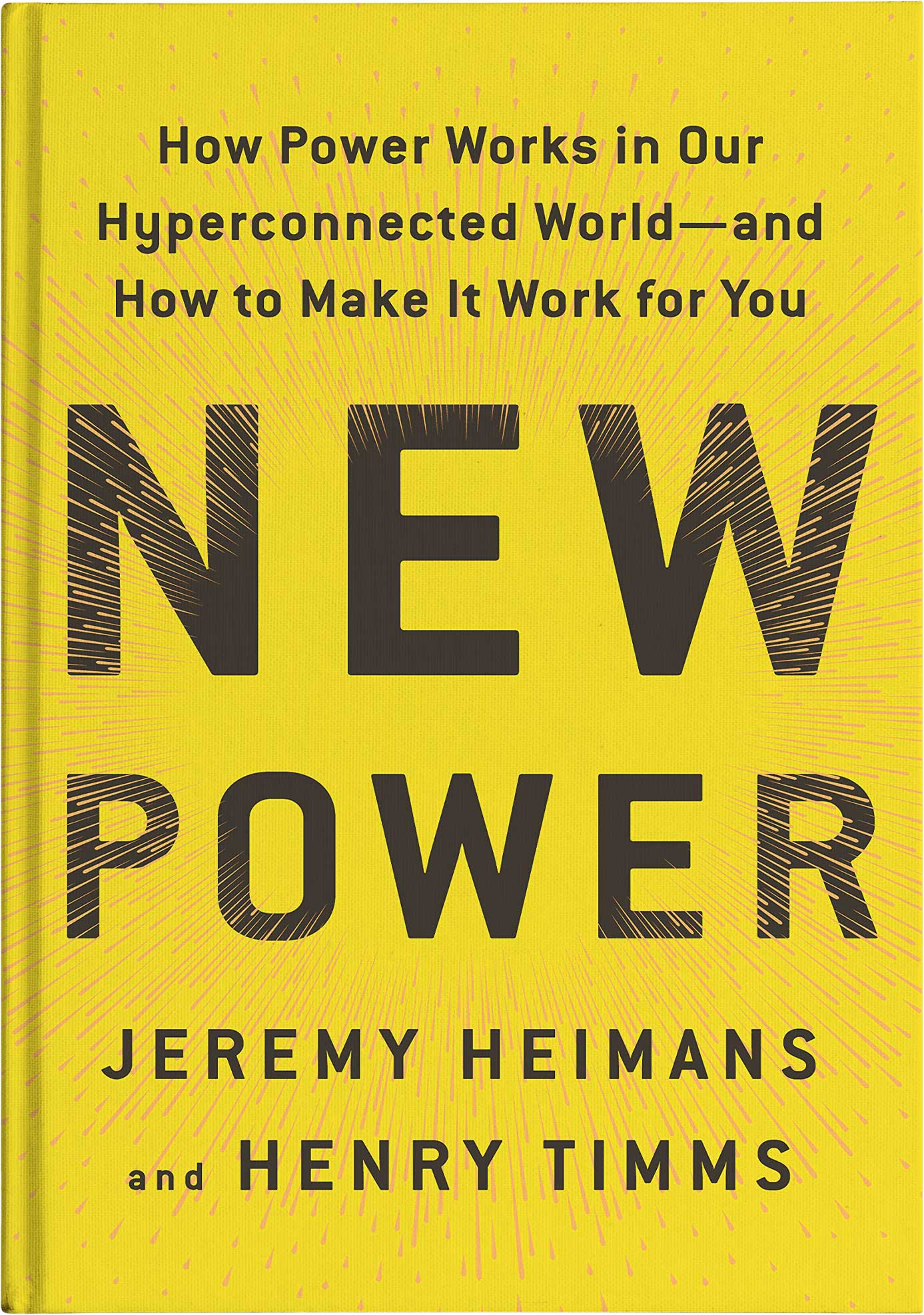