The Culture Code: The Secrets of Highly Successful Groups

Daniel Coyle is the bestselling author of the 2009 book The Talent Code and his latest book The Culture Code, released earlier this year, has also quickly become a business book sensation, especially in the leadership and workplace culture space.

The Culture Code explores the three skills that are required to become a ‘highly successful group’. More specifically, it looks at how to build incredibly robust workplace team cultures that are highly functional and sustainable, now and into the future.

Coyle sets about his exploration by decoding an eclectic group of teams including Pixar, the Navy SEAL’s, San Antonio Spurs basketball team, Zappos, IDEO, New Zealand All Blacks, comedy troupes and even a highly successful team of jewel thieves.

Coyle is an advisor to the Cleveland Indians US baseball team, which is probably why he weaves in many sporting teams and leaders as great cultural examples in his works.

By decoding these diverse range of teams, Coyle was able to identify three fundamental areas that were repeated and evident within each team, something he believes is what makes them so successful regardless of industry, organisation or background.

Coyle argues that the three critical areas that these teams share are, firstly, they build safety, secondly, they share vulnerability, and thirdly, they establish purpose. This review will summarise Coyle’s research on the essence of safety, vulnerability and purpose for great team success and cultures.

“Groups succeed not because its members are smarter but because they are safer.”

The first platform to work on for highly successful teams is the building of safety. It is the ‘foundation on which strong culture is built’ and Coyle likens these workplace relationships to be more like a ‘family’. A highly functional family, where you can take risks knowing that the group will support you, where people in this family team feel ‘close, safe and share a future’ together.

People have always needed to belong to their tribe and whether we are conscious of this or not, humans are obsessed with the one critical question: “Am I safe here?” Coyle cites Amy Edmondson a Novartis Professor of Leadership and Management at Harvard University to back his claim.  Edmondson, who is fast becoming the global ‘Psychological Safety’ guru, defines team safety as, “a shared belief held by members of a team that the team is safe for interpersonal risk taking.”

What was fascinating about those groups that built safety, is that they are also robust with their feedback and have high expectations because they share ‘belonging cues’, which Coyle describes as: “1. You are part of this group. 2. This group is special; we have high standards here. 3. I believe you can reach those standards.”

“Strong cultures don’t hide their weaknesses; they make a habit of sharing them, so they can improve together.”

If building safety is the ‘glue’ for group belonging, then having a shared vulnerability is the ‘muscle to translate connection into trusting cooperation’.

Having a shared vulnerability sounds easy, or can even appear like an unimportant soft skill, however creating team vulnerability is probably the hardest and most important skill to develop.

In Pixar for example, they have created a ‘BrainTrust’ approach to assessing and improving movies during their development. Apparently all of the Pixar movies ‘suck at first’, however by having these routine huddles, where they offer candid and sometimes brutal opinions about the films flaws in ‘breathtaking detail’ the films can be ditched, but in most cases they are resuscitated. Although they describe these discussions as ‘more like a painful medical procedure’ they end up being where these movies get better, and as a result, it has become the birthplace of Pixar’s greatness.

Coyle also details a similar approach in the example of how the US Navy SEALs share vulnerability. They have what are known as After-Action Review (AAR) discussions that are ‘uncomfortable, candor-filled’ moments.  These AARs take place immediately after a mission or training session, where they analyse in detail what went wrong and where they face uncomfortable questions, head on together as a team. The goal of the AARs is to create a flat landscape without rank, so they can discover what went wrong and how to improve it next time. There are no agendas and no minutes kept, as it is designed to be a robust discussion to get to the truth.

All of Coyle’s examples of developing the skill of team vulnerability share a common theme and that is that these moments of candor are ‘clunky, awkward and full of hard questions’. These uncomfortable vulnerable moments however, don’t just happen by accident, ‘they happen by design’. Those involved may not even know or get to the right answer in these discussions, and that is okay, as that isn’t the sole purpose of these moments.

Coyle’s message clearly emphasises that vulnerability is not a weakness, but in fact a major strength. It may be hard to achieve, but he offers some clear ideas for action. Coyle cites Laszlo Bock, former Head of People Analytics at Google, who recommends leaders ask their people three questions to demonstrate their leadership vulnerability:

1. What is one thing that I currently do that you’d like me to continue to do?

2. What is one thing that I don’t currently do frequently enough that you think I should do more often?

3. What can I do to make you more effective?

“It’s not about nice-sounding value statements – it’s about flooding the zone with vivid narratives that work like GPS signals, guiding your group toward its goal.”

To achieve anything, you need a compelling, but realistic goal, a team target to move together, with purpose. In the groups that Coyle studied, they established purpose by getting rid of all the unnecessary distractions and only had a few key priorities. Most importantly, they placed team relationships at the top of the priority list. They establish with purpose and by design a collective goal of working together as a great team and they then self-regulate as they go about their business.

This is partly done by their almost exclusive but internal team language.  Many of us would be familiar with the success of the New Zealand All-Blacks and some of their mantras like, “leave the jersey in a better place.” All the teams Coyle studied have their own internal catchphrases and it may appear ‘cheesy’ to ‘outsider’s ears’, however Coyle has discovered that this is a major feature of their teams’ success.

Establishing purpose within these teams, with only a few critical priorities, ensures they overcome one of the major challenges of modern workplaces.  Not becoming unfocussed with all the noise, chatter, distractions and ‘endless alternative purposes’.

In summary, what Coyle has discovered is that if you want a great team, you need a psychologically safe platform, you need to embrace the counter intuitive strength of being vulnerable and you need to establish a purpose within your team. Teams will either make or break your success. So I highly recommend you read this book and apply these three critical areas so that you can enjoy the power and effectiveness of having great teams within your workplace.

Finally, I will leave you with this quote that sums up the essence of Coyle’s findings and why I believe not only that The Culture Code is an important book, but also why leaders need to embrace not just the goal of happiness (that is a by-product of successful teams) but the goal of creating something great together.

“One misconception about highly successful cultures is that they are happy, light-hearted places. This is mostly not the case. They are energized and engaged, but at their core their members are oriented less around achieving happiness than around solving hard problems together.
This task involves many moments of high-candor feedback, uncomfortable truth-telling, when they confront the gap between where the group is, and where it ought to be.” 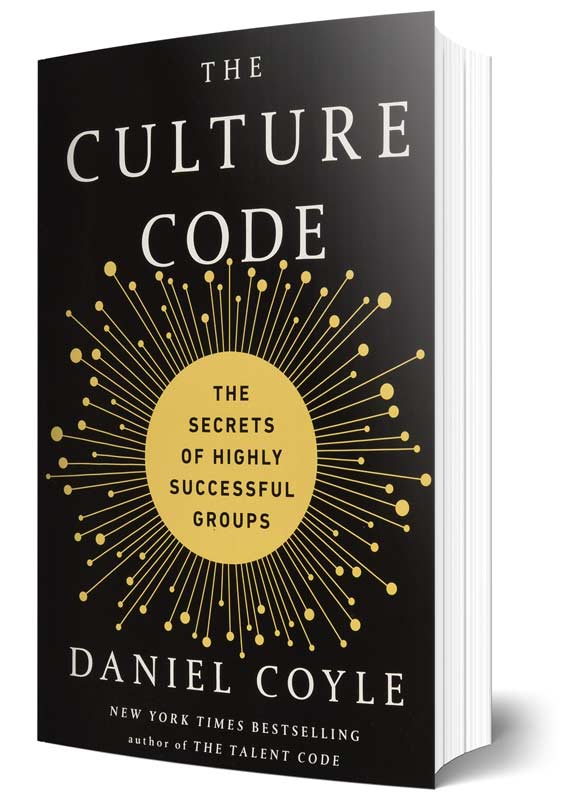