When you have been through pain and feel like you just keep being knocked down, it becomes increasingly difficult to get back up again. But the key to success is not just getting back up and doing the same old thing: it’s getting up and learning to fly.

Can you imagine how a mother bird feels when it is time to literally push her chick out of the nest and teach it to fly? The animal and bird world have a lot they can teach us about rearing our young and then setting them free.

Every mother bird cares for her young hoping that all of her chicks will survive and not tumble from the nest to the ground and die. It does happen, but she is prepared to take that risk, and in doing so eventually setting free the chicks that survive.

I was sitting in my home office one day looking out of the window at the roses that were blooming in my front garden. They truly were glorious. I was most impressed about the fact that I had planted them, and they had not died. An unusual event indeed.

Suddenly I saw one of the rose bushes move quite dramatically. Wondering what might be causing this movement, I walked outside to take a look. To my amazement, at the top of the rose bush, about five feet from the ground, was a perfectly formed birds’ nest, housing a mother bird and her three small chicks. I was mesmerised by this discovery.

Why in the world, when my house was surrounded by beautiful trees, would this mother make her home in such a low and somewhat flimsy dwelling?
Then it hit me what a smart mother and protector she was.

You see, every night a thunderous event would take place on my roof. Possums would move from tree to tree and house to house in search of food, and my roof was a part of their hunting track, so much so that they would often keep me awake. The mother bird knew this and so her way of protecting her young was to build a home covered in thorns that was not accessible to these potential killers of the night.

As the weeks went by I witnessed the growth of the three young chicks. They were growing at a rapid rate and it was evident that unless they soon learned to fly they would be too big for the home their mother had so lovingly built.
And sure enough, the inevitable happened!

One morning I walked out to look at the bird family. On the ground below their home lay one of the chicks, pushed out of the nest to make room for the stronger chicks. All of that work and energy from the mother, to then see one of her young not make it through.

Within a week the other two chicks flew away, followed by the mother bird. She had done her job and now she had to prepare to begin the whole process again.

This whole event really disturbed me, but in a good way.

How similar this story is to our lives, both personally and in business. You try so hard to build a safe environment, you nurture your people right up until the time that they need to fly themselves; and yet it doesn’t matter how much you do, some learn to fly and others just don’t make it.

You see, even though I have focused on the chick on the ground, there are two beautiful birds out there flying around and creating a life of their own, all because of the work and care that a mother demonstrated.

Some of the people you coach, and mentor just won’t make it, but others will learn to fly and create a better world because of you.

There comes a time when all of us have to jump and trust in our ability to fly. 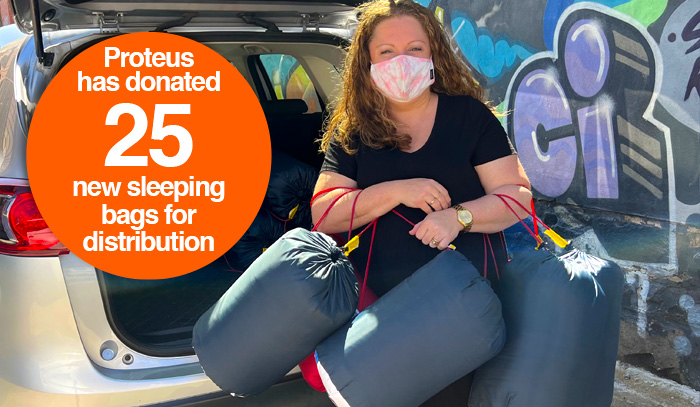 Proteus is proud to have donated 25 new, made to order, sleeping bags to the National Homeless Collective. Leanne Keillor, Community Projects Coordinator, is pictured delivering them. You too can donate to this very important program by clicking on the link below.

Sasha Yuan Olesinski,
Born The 9th Of October At 10am 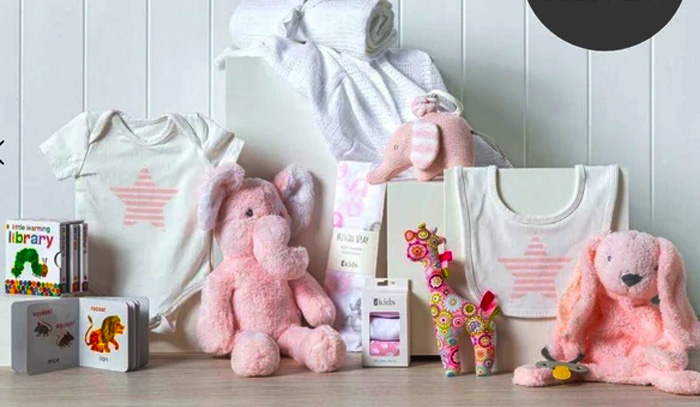 Congratulations to Sales Coordinator in SA, Stefan and wife Shen for the birth of their beautiful daughter Sasha this week. Happy birthday Sasha the Proteus team hope you like your gift. 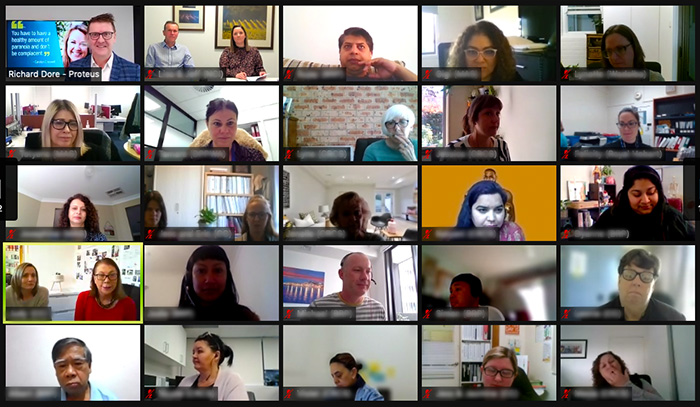 Richard Dore - Co-CEO is pictured launching The Service Factor virtual workshop this week to a ‘sold out’ event. It was a fantastic program, and the feedback has been exceptional. 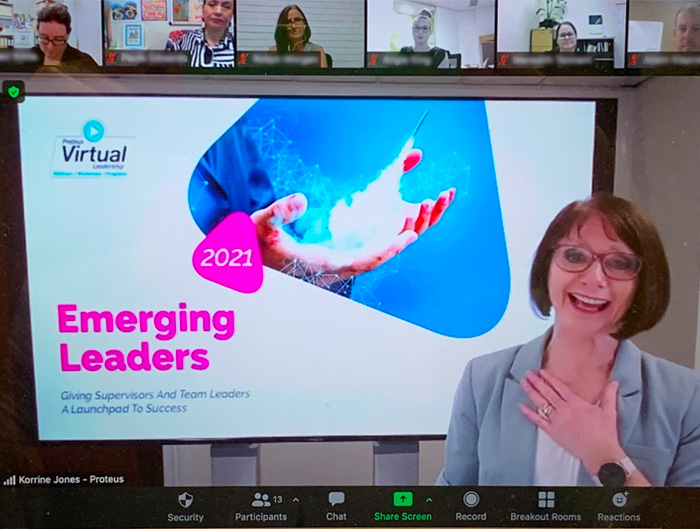 Congratulations to the Anglicare CENTRAL QLD team on the launch of their virtual professional Development program this week. Korrine Jones delivered the first program to delegates from Gladstone, Rockhampton, Barcaldine and Emerald. We look forward to working with you right throughout this exciting initiative. 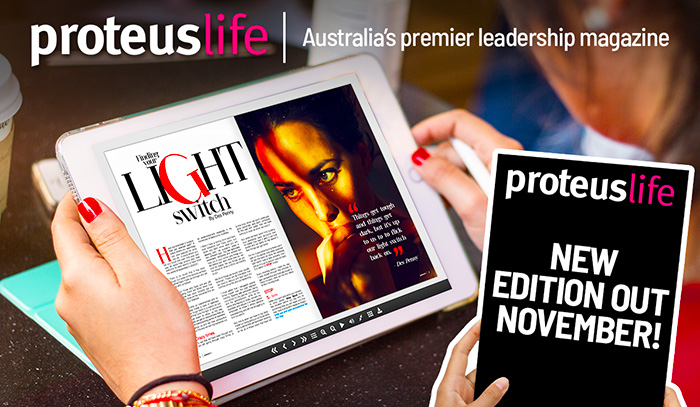 The next edition of ProteusLife magazine is due on 1st November. If you have not yet signed up to receive this FREE leadership magazine, then click on the button to do so. 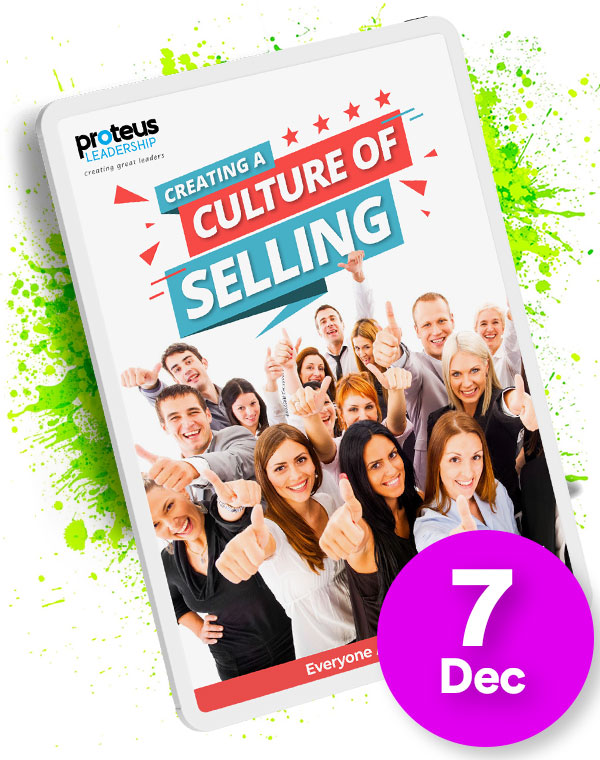 Everyone A Salesperson
This program has been designed to assist individuals and teams create and embrace a culture of selling. It also looks at how the sales process can be conducted in a highly ‘functional’ way and indeed be one of the most powerful and positive activities in our organisations.

Each participant will have a greater understanding of their own role as a salesperson, as well as the sales process and how they can personally adopt a more functional approach to selling.

Participants will produce an action plan of specific strategies and ideas to proactively create a culture of selling in their teams and workplaces.

Participants will become more confident in their responsibilities as a salesperson through gaining new knowledge, skills and strategies to assist them sell functionally and authentically.