The 3 Elements Of Successful Innovations

One of the most commonly-quoted stories around disruption is about Kodak, which was the market leader in film photography, but failed because it couldn’t adapt to digital photography.

There are many variations of this story, giving various reasons for Kodak’s demise: It had too much invested in film, it had grown so big it had stopped innovating, the organisational structure couldn’t cope with a digital world, and so on. There’s even one dramatic story that the Kodak employee who invented the first digital camera was told by senior management to hide his invention because it would destroy Kodak’s existing market.

The problem with these stories is that they aren’t true. What’s worse, they hide the real reason behind Kodak’s demise.

So why did Kodak fail?

To answer this, let’s first look at one of the most common reasons many change programs fail.

And just to be clear, when we’re talking about ‘change’ here, I’m not talking about the random, senseless change programs that many businesses go through from time to time. Let’s focus on razor-sharp innovation programs that are intended to keep your business current – or even ahead of the game.

Ideas are not enough

First, of course, some businesses only pay lip service to change. They might run a one-day innovation workshop, a fancy innovation off-site, or something else that’s designed to generate a lot of ideas – with the promise of transforming the business and disrupting their industry.

And you know what? Sometimes it works… at least as far as generating ideas. People come back with butcher’s paper, flip charts, and sticky notes full of ideas – some good, some bad, some practical, some impractical, some crazy, and some surprisingly sane.

But ideas alone are not enough. Far too often, those ideas never get implemented, because the leaders don’t make time and space for action. Change needs ideas and action.

Indeed, a common definition of innovation is ‘applied creativity’ – in other words, taking your ideas and putting them into action.

Of course, ideas in action are better than no action at all (or, as General George S. Patton said, “A good plan violently executed now is better than a perfect plan executed next week.”). But even that alone is not enough. The problem is that many of the ideas just don’t have any practical value. It’s all very well to implement ideas, but if those ideas aren’t really moving your business forward in any meaningful way, they are worthless. 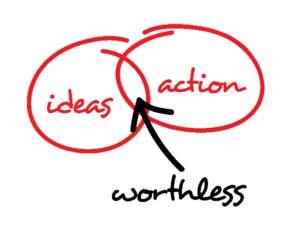 And that’s the problem with so many changes and innovation programs today. You might be constantly evolving and changing, but still find yourself disrupted and blindsided by some smart, savvy start-up that does something radically different. Or the world changes in unexpected ways, and your wonderful ideas are instantly obsolete.

That’s what happened to Kodak. They weren’t afraid that digital cameras would cannibalise their existing products; they just didn’t anticipate it. They didn’t deliberately try to kill off a threat; they just didn’t see it as a threat.

The first digital camera – built by a Kodak engineer – was as big as a toaster, took 20 seconds to take a picture, and the resolution was much lower than a print. Kodak’s management assessed it, but ignored it because they thought it would never be good enough to compete with film cameras. They didn’t account for exponential growth, which meant the improvements happened much faster than they expected.

To be truly successful, innovation needs all three elements: ideas, action, and foresight. 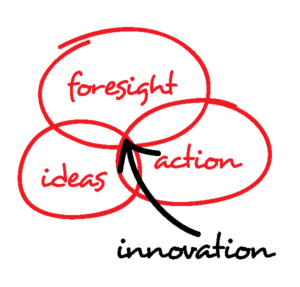 Foresight is the ability to look into the future. It’s not about predicting the future like a fortune teller or a lucky gambler. Rather, it’s about using the tools that futurists use to direct and drive change.

The simplest version of this is to just ask the question: What problem are we solving for our customers?

That’s a good start, but even that question starts from the present, not the future. You’re talking about your current customers, their current problems, and your current solutions.

It doesn’t look further into the future, which means you’re still vulnerable to competitors who look further than you do.

Pull from the future, don’t push from the past

When you think like a futurist, you can then act like an innovator. If you really want to create compelling change, first learn how to see into the future so you can design a path to success.

By Gihan Perera
Published with permission from International Institute of Directors and Managers (IIDM) – www.iidmglobal.com